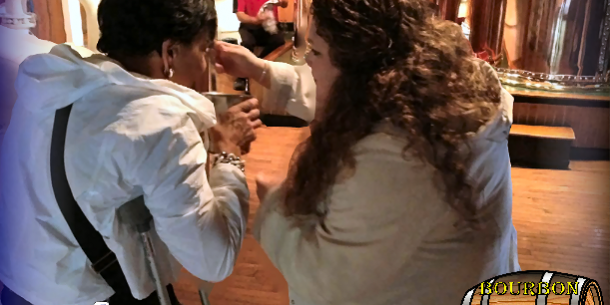 Why Details Matter & Why Keeping Your Cool Matters More

Details.
They can make or break a tour guide’s day.
Along with that, useful details are imperative to making the guests’ experience the most enjoyable.
And since the client pays the bills, making their experience flow smoothly means everything.
A big surprise, while sometimes making for a more exciting day, can throw such a wrench into an itinerary, that even the greatest of drivers and an experienced docent can fall to pieces – or at least appear that they have.
Reactions and emotions can be difficult, if not impossible, to hide from guests, so it’s best to avoid donning a facade.
I’ve dealt with many outings that, had I been given more, accurate and detailed information, could have gone better. While I can’t think of an absolute disaster, as a result, it’s possible that the whole job can go south because of a planner’s failure to ask a few extra questions when talking to the client.
A few other questions might come off as nosey, but a little more info can make a world of difference. Sometimes, it’s necessary for a successful gig.

Here’s one example that started off with the driver and myself heckling the plan, only to later learn of details that truly mattered – not just to us, but to the client and the management at one of the busiest distillery destinations in Kentucky as well.
It was about a week before the tour, when the driver and I, the guide, received a schedule for what seemed like a typical day on the bourbon trail. Pick guests up at a hotel, make a few stops, and try to teach a bit along the way.
The schedule did have one unusual item on it – three letters at the top of the itinerary – V.I.P.
Hmm. I wondered what was up with that.
Curious, the driver and I both questioned the planner about the “V.I.P.” note next to the client’s name and number.
The planner, who was generally right about getting the essential information to the crew, stumbled for a second when we asked.
She said, “oh yeah, it’s a birthday outing for the client’s husband,” implying that he was the very important person.
Hmm. That was a first. Not that someone would celebrate a birthday by spending their day touring Kentucky distilleries, but that the person of honor would be described as a V.I.P.

Debbie, the planner, went on to tell us that there would be balloons and streamers and other birthday party knick-knacks for us to decorate the inside of our bus prior to departure.
Not being ones for decorating a bus for a whiskey tour, the driver and I joked about the set up to this job.
“Bob, did you put the V.I.P. ice in the V.I.P. cooler with the V.I.P. waters?”
I remember John, a most professional driver, asking me with a grin as we prepped the bus.
I was busy trying to tape streamers and other “happy birthday” crap to the inside our bus, so the chuckle came at a good time. It all seemed a bit ridiculous to us both.
We treated all guests like important folks, simply because they are. So this title for someone, just because he was turning another year older, seemed a bit much.
But no big deal, we continued to play ball, meanwhile joking about the decorations and V.I.P. status.

It was raining cats and dogs that day – messy and a bit cool outside. Not ideal conditions.
Our beautiful and clean, crepe paper-adorned bus would suffer soon with wet passengers, but like real troopers, we loaded them up and began the 1.5-hour drive to Makers Mark.
The windy and hilly route went a bit slower with the rain, so as the guide, babbling on about Kentucky and whiskey, I had plenty of time to dig deep into details.
Nuggets about government rules, regulations, and resolutions relating to bourbon sparked much interest from one middle-aged lady in the group who sat within an arm’s reach of where I stood.
Remember the rain?
She was dressed in all white – white denim, including her jacket. She had lots of white, minus the single metallic crutch and black air cast her left leg was in.
Having traveled this route hundreds of times before, standing before the group as the bus made its way along the hilly, curvy road wasn’t uncomfortable, nor abnormal for me.
So as I swayed with gravity and braced myself from inertia during the ride, as she peppered me with question after question about stuff, most guests never second guess. She wanted specifics.
With each question, she’d plug away at her phone, apparently fact-checking my babble. Even doubting me on Bourbon basics like Congress’ 1964 definition of, and its subsequent declaration as America’s Native Spirit.
“What’s up with that?” I wondered.

The lady in white didn’t demonstrate any trouble boarding the bus with her bad leg and crutch, so I didn’t anticipate any problems getting her around the grounds, steps, and path that were part of the Makers Mark experience.
I offered my hand when we arrived and off-loaded, of course, but then focused my attention on other things as they gathered in the welcome center. The rain was still coming down hard, fast, and heavy.
It was a few minutes later when I went to see if all was good and the tour was ready to go, that Birthday Boy, speaking softly so not to draw attention, say, “Bob, you know what you got to do, don’t you.”
The dumb look on my face answered him before my mouth could.
“You need to get a golf cart for Ms. Penny and drive her around here,” he clarified. “You do know who she is, don’t you?”
Penny Sue Pritzker, I soon learned, is an American billionaire who, before our tour, was confirmed in a 97-1 Senate vote to be Obama’s Secretary of Commerce.
“She’s like 9th to the President,” the former V.I.P. explained to me.
Within a couple of minutes, I’d brought Makers Mark management and John, my driver, up to speed on the situation.
Jacquelyn, the tour and welcome center manager, put all pieces together in a matter of seconds.

Her boss at the time, Sydina, best described the situation to someone a year later.
“So it’s pouring down rain, and here’s Bob and Jacquelyn in this Torula-covered golf cart taking this lady in white on tour,” Sydina explained.
Like most things kept near distilleries and rickhouses, the golf cart was covered in years of distiller’s mold.
Black fungus, mixed into the pouring rain and white denim, equals a bunch of shits and giggles when telling the story in hindsight.
The plastic we covered the seats and Penny with assured onlookers that we were at least making an effort. The rest of the group passed us as their official, hour-long tour, got underway.
Fifty yards and about 10 minutes later, Jacquelyn was pulling distillate samples from the shiny spirit safe for Ms. Penny to taste from a mug. More than once, and I followed along to snap a photo here and there to prove it all happened.
While the entire group was a bit upper-crusty, the V.I.P. was NOT Birthday Boy. We figured it all out on the fly and, thanks to Jacquelyn and Sydina and a fungus-covered golf cart, marked it up as a win. A narrow victory, but a win nonetheless.

There were no complaints, and my driver had some good laughs about it as he waited in the dry and warm gift shop with the lovable ladies of Makers Mark.
Yes, it could’ve gone smoother had we known Birthday Boy was not our actual V.I.P., but then this story about the importance of detail wouldn’t be as entertaining.
My favorite aspect is that no person involved lost their composure at any point.
Just as details are important, so is the big-picture mindset that no part of our jobs as planners, drivers, guides, or hospitality workers is a matter of life or death. We’re not repairing cars, pulling teeth, or curing cancer on the bourbon trail.
It’s meant to be fun, so keep it light-hearted.