No Greater Love Than This 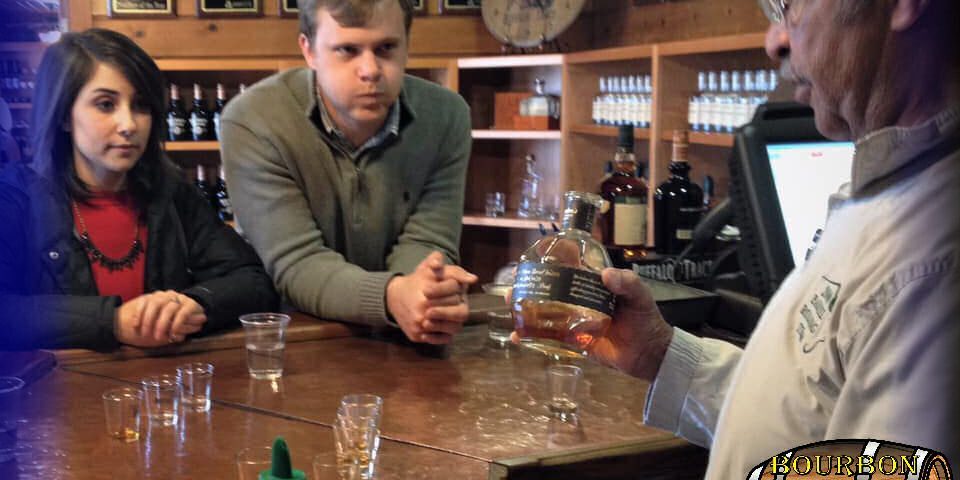 There are groups considered unique, but there’s also groups that are indeed one of a kind.
In my early years as a Kentucky Bourbon Trail tour guide, I landed one of the latter. And I’ve yet to have a replica of their adventures.
It was around 8 a.m. when I picked the two couples up at the newest, most modern, and classiest hotel in Louisville – the 21C, which houses its public art museum.
I pointed out the usual highlights of Main Street, then the Falls of the Ohio River, as we ramped onto Interstate 64 headed east for the great Buffalo Trace distillery.
The assignment was simple. We’d arrive at BT at 9 a.m., but we’d not depart until early afternoon.

It was a two-day gig – a real treat for me mid-week since most visitors arrive late in the week just to join herds of other Bourbonites going from one distillery and gift shop to another.
Weekdays, on the other hand, guests can have a distillery and its docent to themselves. My clients being a mother, her adult son, and their significant others was an ideal setup for a relaxed and fun day.
Easy to talk to and full of good questions, the foursome was an ideal group.
I learned about halfway into the hour ride to BT, that knew the whiskey basics.

They also knew what they loved above all else, and that was Blanton’s. Sazerac’s first single barrel bourbon, Blanton’s, was created in 1984 by then-Master Distiller Elmer T. Lee in honor of Kentucky Colonel Albert B. Blanton, who led the distillery for 55 years.
Blanton’s was already popular on the day of the couples’ tour, and visitors in the know would often find a bottle in the gift shop throughout the month. Such a find these days is rare.
I got them to BT on time and introduced them to guide Freddy Johnson – a third-generation BT worker who remains the only tour guide admitted into the Bourbon Hall of Fame. His name now dons a Sazerac root beer – some proceeds of which help maintain a historic Frankfort cemetery.
So with Freddy, I knew the couples were in the best hands possible. Once they got underway, I was able to take my usual break, chit-chatting with colleagues, and exploring the grounds on my own.

I expected an hour and 20 minutes to go by before they’d return to the visitor’s center for a tasting, shopping, and our eventual departure.
Nearly two hours had passed with no sign of the, so I went out on a search and recovery mission.
I came across the couples and Freddy inside an old limestone block building known on-site as the Burgoo kitchen. That’s where Blanton, in years past, concocted bushels of the great Kentucky stew for workers to enjoy on select days.
With the scenery, Blanton’s history, and engaging Freddy, the group was happy and interested. There was no rush, so I moved on, away from the group, to mind my own business.
They ventured off into the plant. After another hour or so, I again found them outside the two-story log structure dubbed the Clubhouse, a popular venue for weddings, parties, and meetings among Sazerac executives.

This time, the mom’s fiancé, Jim, took me off to the side and shed some light on the situation.
“He’s planning to pop the question,” Jim said, referring to his ‘stepson’ Dom. “You may want to follow behind us in case I need help getting some pictures.”
How cool was that? So, while still keeping a polite distance, I strolled behind as they walked the manicured historic grounds.
Dom and his rather quiet and seemingly shy girlfriend found their way onto a cute little bridge that crosses a charming small stream flanked by perfect landscaping. What a picture-perfect spot, but … nope.
The group meandered around until Freddy spoke about Blanton’s statue, before heading toward some gorgeous, budding dogwoods – another great photo op. Nope, not there either.

I feared my presence, albeit at a distance, might be cramping Dom’s style, so I stayed out of view for a while longer. As I roamed at a longer length, I stopped at the little guard shack/smoking area and struck a conversation with Kevin, the guard.
I gave him the low down on the couples’ plan, about the time they passed us and headed down toward the main parking lot and the east side of the distillery.
“I bet they’re heading toward Warehouse H,” Kevin suggested.
Of course, they were. Warehouse H is commonly referred to as the Blanton warehouse. It was the only metal-wrapped rickhouse on a property adorned with century-old brick buildings.

This was it, so I moved along in an attempt to catch up – while not wanting to appear, I was in a hurry to catch up. A casual hustle… perhaps.
At about 30 feet out, I saw Freddy, Jim, and the bachelor’s mom make a solid stop in the entrance to Warehouse H. Dom; it seemed, had ushered his bride-to-be into the dark passageway of the warehouse.
I could hear footsteps on the wood planks inside as I approached.
Then, as I was about 10 feet from the entrance, I heard a heart-pounding wail.
Dom’s mom, now with a smile ear to ear, caption video of the whole thing.
I later saw the recording where Dom walks his fiancé to the last window at the very end of the rickhouse. He’s silhouetted by the light from the window as he takes a knee and reaches out to her.
Beautiful stuff. Hugs and kisses followed, of course.

With the business done, the entourage made it back to the tasting room. When I popped in to check on them ten minutes later, there was Freddy pulling out some bottles I’d never seen being poured for BT guests.
The standard pours of the day – Eagle Rare and BT – just wouldn’t cut it for this group. So, out came a 103 proof Gold Blanton’s sold only overseas.
Then, Freddy whipped out a bottle of 20-year-old Pappy Van Winkle. While that juice had been distilled at BT since 1992, the bottle in Freddy’s hand was produced at Stitzel-Weller in Louisville.
That remains the only time I’ve ever seen Van Winkle poured for a guest’s tasting.
Some other labels followed, but in the end, Dom assured Freddy that he remained a Blanton’s man.

Yep, even after the engagement, talk remained focused on Blanton’s. And it continued throughout the next day traveling to other distilleries. The man knew what he liked.
Two years later, the foursome returned to Kentucky for a followup trip to BT.
A few things were different that time, including a fresh bun in the oven for Dom’s wife, and the addition of her father – the soon to be grandpa.
What a great trip to tag along for, too.
Their return trip to Bourbon Country was, unfortunately, for the expectant mother, in celebration of their first anniversary.
The trip itself, however, wasn’t the main event.
This time, the couple had made arrangements (and a hefty investment) well in advance to select their very own barrel of Blanton’s. That’s no small deal to pull off, especially for someone uninvolved in the spirits business.
Dom was persistent, and, like his new wife, he knew what he liked – even loved.
It was those two trips with those two couples when I learned that, for some, there’s just nothing more significant than your one true love – even if that was love was for Blanton’s Single Barrel Bourbon Whiskey.